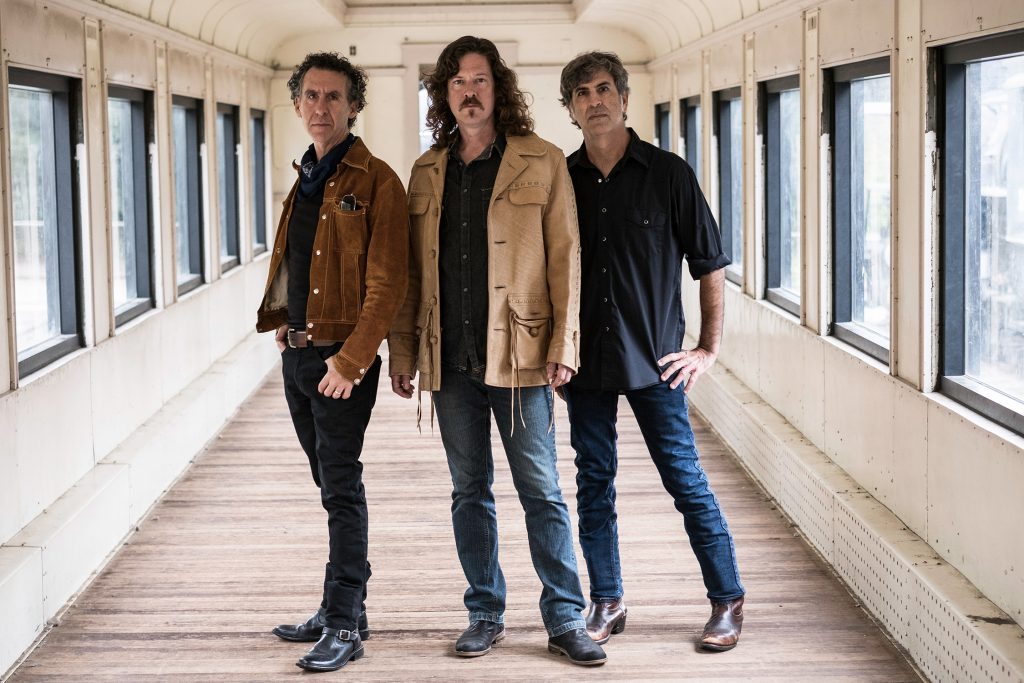 As the clock struck noon on a fateful Wednesday in a honky tonk in L.A., Joey Peters, Rich McCulley and Ted Russell Kamp formed Stash, a true all-star band of the L.A. country and roots music scene.

Stash is one of the finest and most soulful roots rock bands on the West Coast today. Their sound combines the road-tested richness of classic 70s country with a modern edge to make a timeless blend of Outlaw, old school country, and rock and roll.

Based on the songwriting team of drummer and producer Joey Peters (Grant Lee Buffalo, Cracker), guitarist, singer/songwriter and producer Rich McCulley (Geffen, Columbia) and bassist, singer/songwriter and producer Ted Russell Kamp (Shooter Jennings, Tanya Tucker, Duff McKagan), Stash has been writing, recording and singing songs about life and love, striving and surviving, yearning and learning, and pain and cheating. Satisfying melodies, driving grooves, twangy guitars, and whiskey-soaked vocals give a heartfelt urgency to every song they write and play.

Now’s the time, dive in, check out Stash.

Ted Russell Kamp has been a professional bass player, singer songwriter and producer for the last 20 years.

Rolling Stone has called Kamp an MVP of the California Roots Music scene. Aside from being a singer / songwriter and artist in his own right and releasing 12 albums of original material, he has been a member of the Shooter Jennings band for over 15 years and recorded and played with countless other artists including Duff McKagan, Wilson Phillips, Jessi Colter, Marilyn Manson and many more. Ted also got his first Grammy in 2020 for playing bass on the new Tanya Tucker record which won the Grammy for Country Music album of the year. Ted’s record “Down In The Den,” came out in July 2020 was featured in Rolling Stone Country, American Songwriter and on the Sirius XM Outlaw channel and debuted at #1 on the EuroAmericana Radio chart. Ted’s newest record “Solitaire” came out on May 7, 2021, received critical acclaim, and debuted at #1 on the Euroamericana Radio Chart.

McCulley hails from the Central Valley of California where he wrote, recorded and toured with a variety of country rock and pop rock bands on labels such as Geffen and Columbia. He now makes his home in El Paso, Texas and is still finding new inspiration in life.

With his latest solo record “Out Along The Edges,” he writes of both love and loss, good and not so good, hard and better times. He’s brought his classic, road-tested sound: satisfying melodies, chiming guitars, hummable harmonies, whirling organs … all the elements of catchy roots pop and recorded in a richly-arranged Americana style that is McCulley’s trademark. Ever present is his distinctive gravelly voice, providing a solid dose of heartfelt character throughout the songs.

Since his debut solo record in 2000, McCulley’s credits have included critical acclaim, hundreds of storied gigs from coast to coast, tens of thousands of touring miles, hundreds of published songs and co-writes, and production credits on dozens of records by important L.A. bands. His songs and co-written tunes appear in several movies, including 2012’s “Little Birds” and “Donner Pass.” His music has also been featured on FX’s “The League,” ABC’s “Grey’s Anatomy”, HBO’s “Cathouse” and Lifetime’s “Army Wives” to name a few. “Summer Storm” from “Out Along The Edges” was featured in CMT’s hit show “Nashville” in January 2017.

Running his successful music company for over 15 years, Joey has honed his skills at multi-tasking. He’s overseen all aspects of music production from inception to delivery and the magic that must occur in-between. He has a proven business acumen and an ease around musicians that instills confidence in his clients. The business side of running his company is a large part of what he enjoys about his work.

Having created a niche market of unique hybrid percussive cues, these cues are used consistently in trailers. Some of these credits include: Foxcatcher, Lucy, Jack the Giant Slayer, Out Of The Furnace, Killing Them Softly, Wolverine, Thor, A-Team, Safe, Contraband, Bourne Legacy, House at the End of the Street, Looper, Die Harder, Taking Pelham 123, Terminator Salvation, Armored, Bangkok Dangerous, Beowulf, The Brave One, War, Planet of the Apes, Lost and Apocalypto.

Joey’s seminal band of many years, for which he was drummer / percussionist, Grant Lee Buffalo (GLB), released four CD’s on Warner Brothers (1992-1999) and toured extensively throughout the United States, Europe, Japan and Australia. GLB played with REM, The Cranberries, Pearl Jam and Smashing Pumpkins as well as headlined its own tours. GLB contributed songs for film and television: Friends (NBC), I Know What You Did Last Summer (Columbia/Tristar) With Honors (Warner Studios), and Velvet Goldmine (Zenith/Single Cell/Killer Films) and reunited in 2011 for a European tour, which kicked off at the Royal Festival Hall in London.